The crimes against Maranello happened at a hill climb in the Swiss Alps.

To many, classic Ferraris are considered works of art, and every time one gets destroyed it is the equivalent of a Picasso or Monet being set on fire. This video of a Ferrari F40 crashing in the Swiss Alps is a tragedy that is only bested by Romeo, Juliet, and Hamlet, so we wish we could live in a world free from Ferrari F40 abuse. The heartbreaking accident took place at the 2022 Kerenzerbergrennen hill climb race in Switzerland as part of Ferrari's global 75th birthday celebration, and according to local reports, the driver and spectators were not injured. The same can't be said for the Ferrari F40 supercar.

The posted YouTube video, shows the F40 racing up a sweeping left hand corner where it loses control pas the apex, and crashes. Unfortunately, the video doesn't show the actual crash, but the audio is bone-chilling, and pictures of the aftermath help fill in the gaps. According to the organizers, the hill climb is nothing more than a museum procession, and most of the cars drive at a leisurely pace, but this F40 clearly entered the corner with a turn of speed. Another video posted by Cars and Planes of Switzerland shows that the F40 suffered extensive front-end damage, but it looks repairable.

One explanation for the accident could be the Ferrari F40's tendency to deliver big chunks of late power rather unexpectedly due to vast amounts of turbo lag. The Ferrari F40 is powered by a twin-turbo 2.9-liter V8 engine producing 471 horsepower and 426 lb-ft of torque. When boost finally arrives, the massive kick of torque can overwhelm some drivers, especially those on old tires leading to accidents.

"We had to report the accident to the police, that's the rule. However, nothing happened to either the driver or the woman who was standing near the scene of the accident," says Peter Rufibach, President of the Kerenzerberg-based race. According to Anton Landolt, media spokesman for the Glarus cantonal police, police authorities didn't make an appearance, as the accident was not of a serious nature. "It is clear that the agreement is that the police will only go to the site and record the accidents if there is serious personal injury," he said. The driver of the vehicle has not made any statements, but with the price of a Ferrari F40 regularly reaching over $1.5 million, we're sure they will be gathering quotes to repair this exotic car, or perhaps looking at a more expendable 296 GTB to practice apex'ing in the Swiss Alps.

After four blurry years in advertising school, and a harrowing career in the advertising industry. By the will of the car gods, and his passion for anything with more than four cylinders, he landed at CarBuzz where he covers breaking automotive news, writes the occasional review, and plays a very average game of Counter-Strike. In his personal time, Mike loves to waste money on project cars that only run once or twice a year, break his ankles at hardcore shows, and get dumb tattoos that make his mother cry. 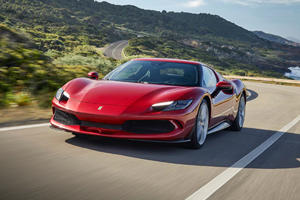